10.10a.m. The removers are perhaps under the English Channel as I type.

Based in Cumbria, they were booked to be in London last week and then Brussels over the weekend, and then to collect our new printing press from its current home in a garage in the south of England and deliver it to us on their way back up the country.

We did at least find removers that we are one hundred percent sure of - called Antique Machinery Removal they are well familiar with Arab presses and know not only how to dismantle them for removal and - does one remantle? - but also can restore them to their former glory. As we are doing this on a shoestring, the restoration will be done by just us.

But I would so like to meet the machine in the home it has had for over fifteen years - and where apparently it has never been used. It was rescued by a family member - a printer - when the family firm in East London closed down.

I know I'd only fuss, making sure it had all its bits and nothing had been left behind. And I know the removers themselves are quite capable of doing all of this without me. But still.

I've cleared the space where it will live at ours. It's our daughter's bedroom, really. Oh dear. She does still like to come home from time to time. 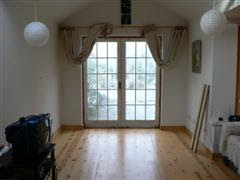 This is the only room in the house that has a really good view of the garden I thought long and hard before deciding to clutter the view up with a large old-fashioned printing press. 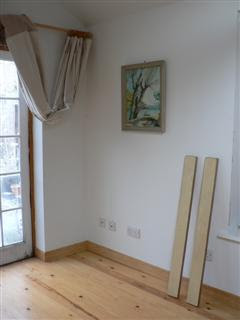 This is the corner it's going in but I've been advised to allow four foot square for the machine, which means that it'll take up half of the space inside the doors.

I've made a pair of skis for it to have screwed to its feet in the hopes that if we want to shift it a bit we might be able to inch it along the floor. I polished the spot where it's going to live and applied beeswax to the skis - I'll let you know if it actually works or not!!

Now I'm worried I've made slippery patches on the floor so the guys will slide around when they come in carrying heavy cast iron bits ande pieces ... a new worry ... what now??? We've got play sand we could chuck on it. Maybe they've got big wet boots with a good grip? Put wet towels all over it? 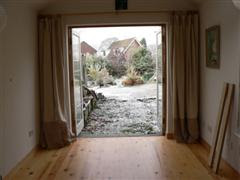 I was already worried enough when I found it snowing outside this morning. There are stories of major things going wrong on the roads in this weather. 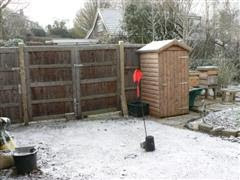 I've been outside and put a red flag on the obstruction in the driveway. It's the stump of a washing line we drove in partway and couldn't get it further in or get it out so now it just lives there needing a warning sign so people don't try and drive/trip over it.


It's like waiting for a new baby to arrive. I'll call when I think they've been there for a few minutes and see how it's all going on.

Well. I did phone - I phoned the seller - and the guys had already come, loaded up and gone. I was going to call the guys themselves after that, but they called me.

They said they had decided they couldn't just deliver it without warning me first. The machine was unusable and likely to remain that way - it was completely rusted up and competely seized up and would take a huge amount of person-hours to get it going. And over a thousand pounds for a professional to take it on. For one person like me with one helper it could be a life-long occupation.

They said it was unusual for one of these to be sold in this condition - more usually it would be given away.

I'd expected a bit of renovation to be needed but not on this scale. I could tell they really didn't think I'd ever see it working.

Another ebay disaster. I have to stop visiting that site.

They'd come too far to take it back. I kicked myself for not having managed to phone them while they were still there.

In the end they said they'd take it back home with them and give it a proper assessment but I know they don't think it'll ever work again.

They're experts and they know what they're talking about. Their business rests on their reputation and the soundness of their advice. They said they wouldn't charge me for today ... and they said they do sometimes comes across Arab printing presses that do look as if they'd work without too much doing to them and if they got passed one ...

I don't know what to do now. I paid £240 for the press. I'd talked to the previous owner - he was proud of being a fifth generation printer in a family of printers ... he told me all about the company and was so proud of the history. I liked him so much. Can I go back and tell him it was a load of rubbish and I want my money back? But what about buying another one if I don't???

Not to mention the cost of sending it back to them.

Anyway, back to printing on my tiny one. Good job it's mostly minature books that I print and although very slow it is at least possible on a little one. 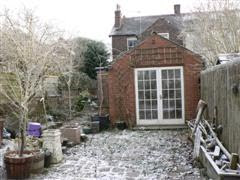 The Mu Printing House
Posted by MMM at 02:10